Young Christians in Wales are joining a 1,000 mile relay from Cornwall to Glasgow to campaign for climate justice.

They are taking part in a walk which begins at the G7 Summit in Cornwall next week (June 13) to the UN COP26 climate meeting in Glasgow in November. Their aim is to put pressure on world leaders to take action on climate change and its effects on the poorest countries.

The Welsh tributary, which is 125 miles, will start in Swansea on July 3 and will go through Margam, Blackmill, Penrhys, Llantrisant, Cardiff, Newport, Magor and Chepstow before ending in Bristol on July 12.

Bishops, church members and schoolchildren will be joining in along the way.

The relay is organised by the Young Christian Climate Network (YCCN) and supported by the Church in Wales. In April the Church declared a climate emergency and pledged to achieve net zero carbon emissions, ideally by the end of the decade. 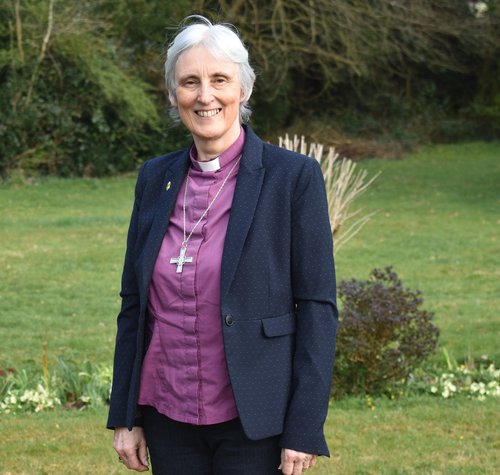 The Bishop of St Davids, Dr Joanna Penberthy (right), the lead bishop for the environment, is among those taking part and invites people of all ages to sign up. She says, “We face a climate emergency which affects every one of us. The decisions being taken by world leaders this year at the G7 in Cornwall and the UN COP26 in Glasgow will have profound consequences for the future of our planet. I applaud the young Christians who have planned this relay to raise awareness of the issues at stake and campaign for climate justice and I look forward to joining them, and supporters of all ages, along the route. I invite all our churches, schools and members to participate in the campaign in whichever way they can. Each step along the route is a call for climate justice – let’s make our voices heard.”

The relay will be launched at Truro Cathedral on June 13. A service of blessing will be held for a boat displaying messages from people around the world who are affected by the impacts of climate change. This boat will be carried on foot, by bike and on public transport all the way to Glasgow.

Rachel Mander, the relay co-lead for YCCN says the walk is “decade-defining opportunity to make a stand”. She says, “We stand in solidarity with people and places that are being plunged into debt and poverty because of climate change. More carbon emissions means more disease, more food insecurity and more poverty. We will be in our 30s when the world reaches 1.5 degrees warming. We will not let the UK government host summits on our doorstep only to hear more talk and no action. We believe it’s time to make decisions which protect people not bank balances, to decide that no country will go into debt tackling climate change. It’s a decade-defining opportunity to make a stand.”

The Welsh tributary will be launched with a prayer breakfast on July 3 at St Thomas’ Church, Swansea. Church groups from West Wales are also planning a ‘spur’ walk to St Thomas’ ahead of the launch.

Further details about the Welsh route will be available shortly.

You can walk any part for however long you chose. Most days will start at 9am and have a lunch break between 12-1pm, we recommend you bring a packed lunch.

From Margam Abbey to Pen Y Fai and Blackmill

From Llantrisant to Llandaff Cathedral and Cardiff

From Newport to Undy

From Chepstow to Bradley Stoke

From Bradley Stoke to Bristol