A church built for a new mining village was the first to open in the newly formed Church in Wales and this month it is celebrating its 95th birthday.

St Martin’s Church, Llay, was opened five years after the disestablishment of the Church in Wales which is marking its centenary this year. It was built to serve miners at the new Llay Main Colliery and their families and was described in a newspaper report at the time as being “cheering evidence of the courage and vitality of the Church in Wales”.

The new church was consecrated by the first Archbishop of Wales, Alfred George Edwards, on February 21 1925 and this month his successor, the current Archbishop of Wales, John Davies, will lead a service of thanksgiving and re-dedication at the start of a weekend of celebration for the whole community.

The Revd Huw Butler, Vicar of Llay, says, “The year 2020 is highly significant as marking a centenary for both the village of Llay and the Church in Wales. Llay Housing Association was formed in 1920 to oversee the creation of the village with the building of 200 houses for miners. During the same year the Church in Wales was disestablished from the Church of England becoming its own province within the worldwide Anglican Communion. St. Martin’s Church, Llay has the honour of being the first new church building in Wales to be consecrated post-disestablishment.”

The opening of the new church in 1925 was reported by the Church Times newspaper:

“Cheering evidence of the courage and vitality of the Church in Wales is to be found in the way in which it has met the spiritual needs of the great new colliery district that has lately sprung up at Llay near Wrexham…Ever since the coming of the ‘sinkers’ in 1915 the Church has literally been on the spot making such provision as was possible for this new flock. Now as the result of courage and persistency worthy of all praise her efforts have culminated in the spacious and beautiful church of St. Martin. The site, an admirable one in the centre of the village, was given by the Industrial Housing Association and upon it an eminently satisfactory church has been put up from the designs of R.T. Beckett of Mold.” 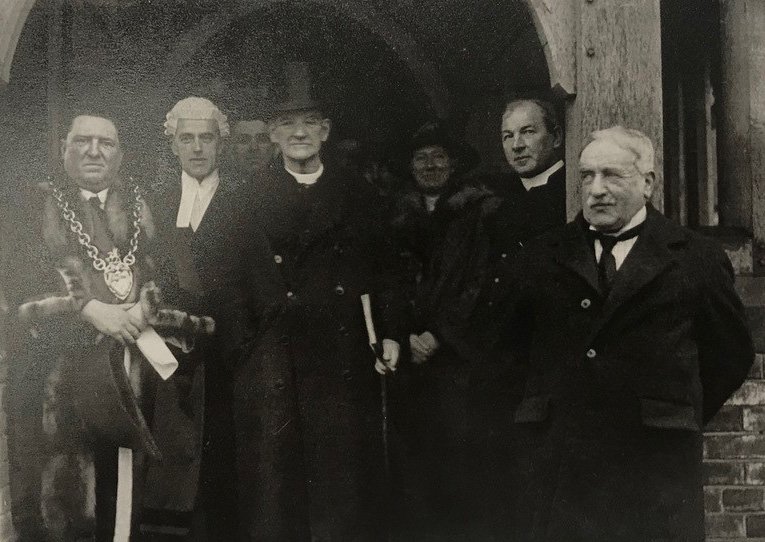 The day of the consecration: the Mayor of Wrexham, the Chancellor of the Diocese, the Archbishop and Bishop of St Asaph, the Vicar and the Church Warden 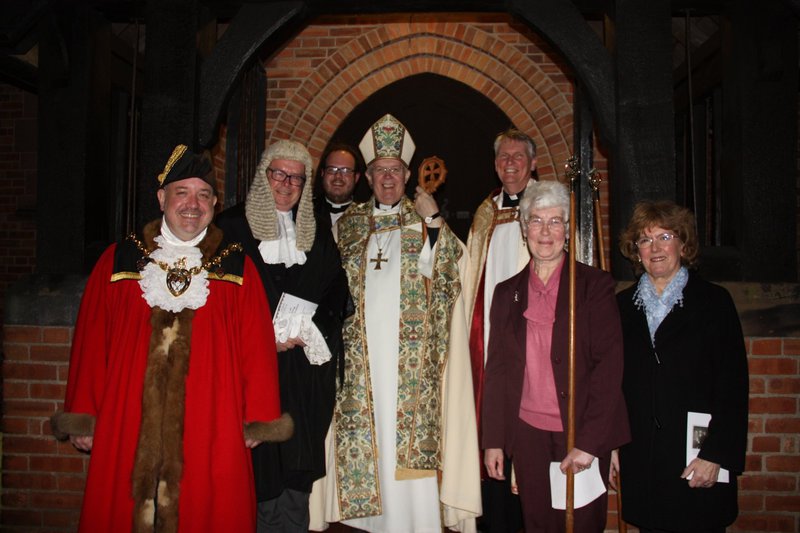 95 years on: the Mayor of Wrexham, the Chancellor of the Diocese, the Bishop of St Asaph, the Vicar and the Church Wardens

In his sermon on the day of St Martin’s consecration, the first Archbishop of Wales and Bishop of St Asaph, Alfred George Edwards, (below, right) declared how the building of St. Martin’s Church was, “a silent but eloquent token of courage, foresight, vision and generosity. In a country at the end of the greatest war in its history, its wound still bleeding, its resources well-nigh exhausted, it needed a stout heart not merely to dream about, but to plan and adventure the building of the new Church. The church itself is indeed a noble building, and…can take its place today among the many beautiful churches in the diocese.” 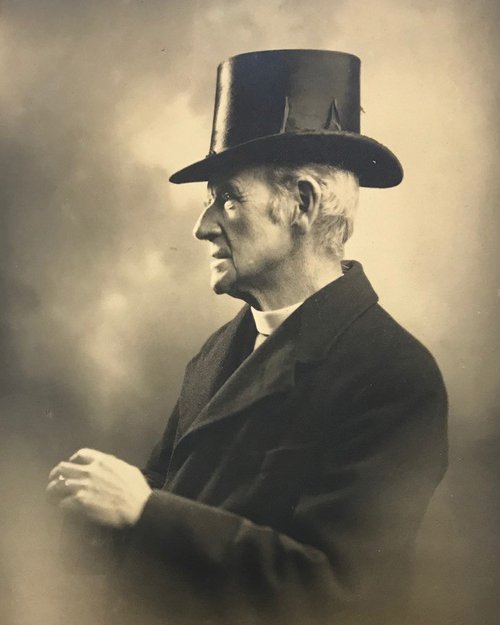 Mr Butler adds, “Over the past 100 years there have been many examples of courage, foresight, vision and generosity within the life of this church and the wider community. Within the ever-changing nature of society and the church these are values which we do well to uphold as we move into the future. As we celebrate the double centenary of this village of Llay and the Church in Wales we hope our changing and growing community uphold the legacy of these virtues, not merely in the beauty of bricks and mortar, but in the building and fostering of a wholesome community in terms of physical, social, mental and spiritual wellbeing.” 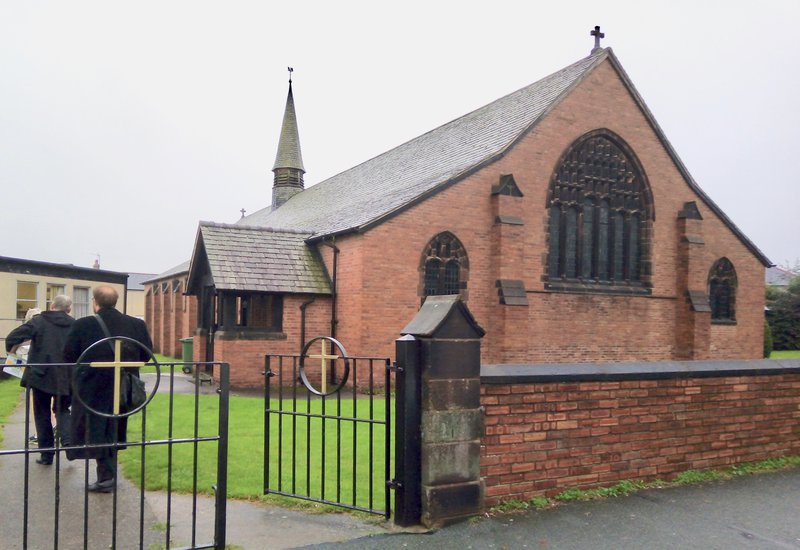 Archbishop John Davies will lead the service of thanksgiving and re-dedication at St Martin’s on Friday, February 21 at 7pm which is open to all. It will be followed by a social event at Llay Miners Welfare Institute.

The Church will hold an open day on Saturday, February 22 from 10am-4pm where there will be displays and crafts relating to the history of the village.

The Bishop of St Asaph, Gregory Cameron, will lead a service of celebration and re-commitment at St Martin’s on Sunday, February 23, at 10.30am, to which all are welcome.

Children are also being invited to get involved in the celebrations. On Wednesday, February 19 the church is holding an “Experience St Martin” day when the story of St Martin will be told in an imaginative way and materials produced for the celebrations. It takes place between 11am-3pm.

Meanwhile, villagers are creating a tree made from their handprints at the library at Llay Resource Centre which will be displayed in the church. 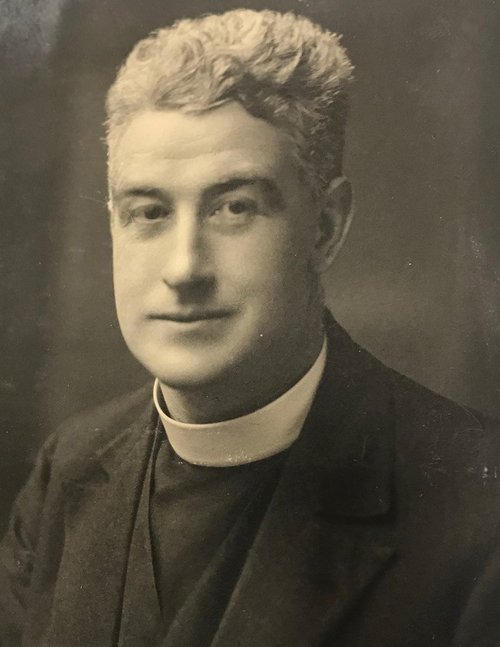 As St Martin’s is still quite a young church, and it occupies an important place in the hearts and minds of the people of Llay, its beginnings are still a part of the living memory of the village. Held in great esteem was the Revd Bransby Jones (left), curate in Gresford and first priest of the church.

When the first coal miners arrived in about 1916, a model village was built centred around shops, a small village school, the life of the church and the Methodist chapel. At first there was a little mission church that met in a house and was led by a layman. He’d been a naval missionary and became one of the first mining missionaries.

Llay initially came under the Parish of Gresford but as the community and church grew it became a parish in its own right. There aren't very many people who remember the mission community, but there are a couple who recall the church in its very early days, and remember the curate cycling from Gresford to lead worship in this new church and the excitement that came from having this beautiful new church in 1925.

This gives us a great continuity: you know in a real sense that the faith has been handed down from generation to generation. But perhaps the most useful thing is that those myths that can grow and develop in church life are quashed quickly – such as the idea that Sunday school used to be packed or the choir used to be hundreds and they sang like the choir of the Sistine Chapel. Such myths aren't allowed to develop in St Martin's because there's always the person at the back who remembers the reality.

There is a real sense of family here. When one person is suffering, everyone feels it. They visit, they love and care for each other in a way where people come to say to me, this really is my second family.

Llay looks to the vicar and the church community to be a place where it can articulate our own history. As part of our celebrations we've commissioned a piece of art based around a tree, in which children and adults from the village contribute their handprint as the leaves of the tree. The tree has always been a symbol of Llay; it’s the symbol of our school, but also of course has rich biblical themes as the tree of life, whose leaves are for the healing of the nations. This will bring a sense that the church is the place where the village tells its story and that story is weaved into the bigger story of our salvation.

A huge new housing development is being built that will bring 400 new homes to Llay which is exciting. It's going to massively change the dynamics of the village as suddenly those who live in the old parts of the village, the old colliery housing, the original council housing, will be in a minority now with the new estates being built on land around the Gresford Road. The first point is going to be making people feel welcome in our village and not like a satellite of Gresford or Rosset. There is a desire in St Martin’s to draw people into the life our church community, into the life of faith.

I love the fact that we worship in a church that was founded by a curate who was excited about Jesus and excited about bringing the Gospel to this new estate, this new model village. And so I feel that as a curate now, there is a tradition here which I enjoy sharing!