Glyn Bevan, a church warden and choirmaster from Merthyr Tydfil, served as an officer in the Royal Navy during WW2 and was working at the Operational Intelligence Centre at the Admiralty in London, aged just 24, when peace was declared. Here is his diary account of the VE Day celebrations in London. 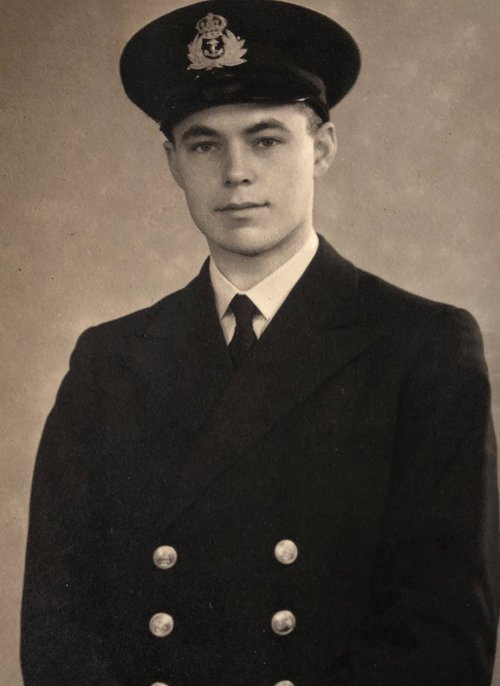 Violent thunderstorm, between 0100 and 0300. I was woken up by an extremely bright flash of lightning at the start. Heavy rain for a time. I believe there was a thunderstorm the night war was declared too. The streets were already filling with people as I cycled into Admiralty. The end of the war has coincided with a big leave party from the BLA and also with the return of a large number of POWs, so besides the usual flags and banners many houses have "Welcome home" and "Welcome home Pally" on them. About 75% of the houses and shops on the way in had at least one flag. All very like the Coronation in a way except that the whole thing has so much more meaning. Am in Admiralty all day. Went out to lunch with Joan and had to fight our way through perfectly enormous crowds in Trafalgar Square. Got held up by a procession on the way back and we were both streaming with perspiration, almost exhausted by the time we got back to the cool corridors of Admiralty. Church bells were ringing all day. I locked up the office at 1500 to hear the PM - the first time it has been locked up since war started - and again at night to hear the King who spoke very well.

Went out again for dinner - up to Piccadilly and Leicester Square where it was almost impossible to move. Planes were flying over dropping flares and the crowd was letting off explosives. Took Joan and another girl out into Whitehall at 2230 to see the lights. A lot of Whitehall was flood-lit, all Trafalgar Square was as light as day with mobile searchlight batteries, and Parliament. The Jack on Parliament Tower was flood-lit too and looked grand and so was Big Ben. The show piece in Whitehall was the Ministry of Health which had flags of all the nations up besides being floodlit and bathed in searchlights. We went down just in time to see and hear Churchill speaking to a crowd of 60,000 from the balcony. The place was massed between Parliament Square until past the Cenotaph and the whole lot of us cheered and cheered at intervals through his speech until we were hoarse. Then went up to Trafalgar Square where they were letting off dozens of Very lights and explosives. The crowd was so immense that we simply had to drift with it, you couldn't move independently.

Eventually we got through Admiralty Arch as most people seemed to be going to the Palace. The Arch was lit by 40 searchlights and it was almost literally as bright as day. This was in addition to the usual floodlighting arc-lamps. The National Gallery and St Martins were also floodlit and looked grand. Planes dropping flares over St James Park, and there was also a bonfire there. Exceedingly warm, muggy day, More thunder to come I should think. 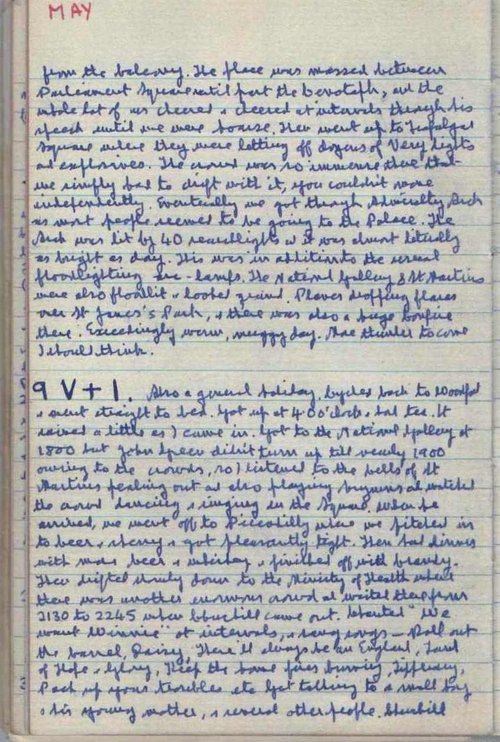 Also a general holiday. Cycled back to Woodford and went straight to bed. Got up at 4 o'clock and had tea. It rained a little as I came in. Got to the National Gallery at 1800 but John Green didn't turn up till nearly 1900 owing to the crowds so I listened to the bells of St Martin's peeling out and also playing hymns and watched the crowd dancing and singing in the Square. When he arrived we went off to Piccadilly where we pitched into beer and sherry and got pleasantly tight. Then had dinner with more beer and whiskey and finished off with brandy.

We then drifted down to the Ministry of Health where there was another enormous crowd and waited there from 2130 to 2245 when Churchill came out. Chanted "we want Winnie" at intervals and sang songs - Roll out the Barrel, Daisy, There'll always be an England, Land of Hope and Glory, Keep the home fires burning, Tipperary, Pack up your Troubles etc. Got talking to a small boy and his young mother and several other people.

Churchill came just after the floodlights went up and got a simply terrific reception. We yelled ourselves hoarse all through his speech, especially when he said, "And let us nor forget our great Navy" and "God bless you all". And we yelled for about five minutes at the end. Then went through the Park to the Palace where there was another enormous crowd. Flares and firecrackers too. The King and Queen came out just after we got there. Eventually got back to Trafalgar Square and I took John up on Admiralty Arch. We joined in songs in the Square and eventually he jumped a lift to Liverpool St and I went into Admiralty canteen to get some tea. Came back via Whitehall, the Embankment, St Paul's. After the West End the City was blacked out, there was barely a light showing in Stratford and Wanstead. Got to bed by 0200.

After the war, Glyn returned to Cambridge University to complete his degree before settling back in Merthyr to help run the family business with his brother. A talented musician, he was the organist and choirmaster at Christ Church, Cyfarthfa, for nearly 25 years and also served as there as a church warden. He died in 1994 after a long illness.