Just a year ago a city centre church opened its doors to invite in homeless people for breakfast. The club is now thriving, with guests offered more than just physical nourishment, says the Rector, Canon Ian Rees.

At the beginning of 2019 St Mary’s in Swansea City Centre began a breakfast club on a Tuesday morning for people who are homeless or just wanting some company. Whilst there was clearly a need already identified by people in the church for such a provision we had no idea how it would work.We decided the breakfast needed to be good and each week we offer cereals or porridge, toast and a full cooked breakfast. The first week saw an attendance of 14 and this has risen steadily to around about 30 now. Some people will come for their food and leave but an important element has been to try and encourage conversation and quite a number of people will stay for a good length of time. 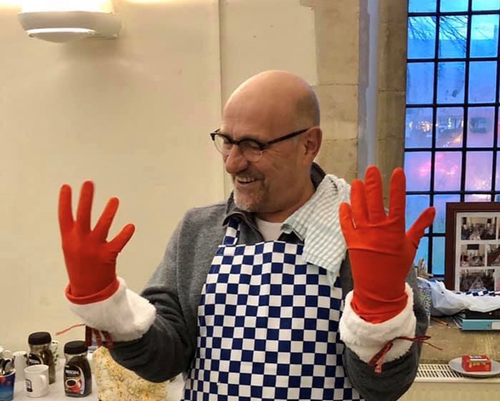 Allan Jeffery, left, who manages the project, has stressed the importance of building relationships and many conversations have been held which have led to an opportunity to provide support or help to people outside of the club. For example, each week we also have a supply of some essential clothes and toiletries which are given to people and through November to the end of February we have hats, scarves and gloves which can simply be picked up from a table at the back of the church by anyone who needs them. Those have been donated by church members and friends. 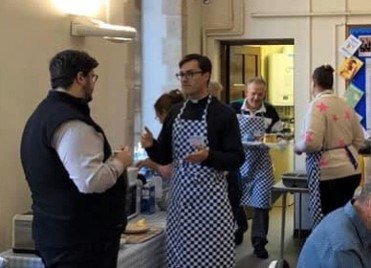 We rely on some really dedicated volunteers, some of whom help out at other projects across the city and we have spoken with other churches and groups who are supporting homeless people to avoid duplicating the support offered. It is sad that there is such a need for this kind of support and at St Mary’s, day by day, we also welcome homeless people who can get a sandwich, cake and a drink from the coffee shop in the church, or use the toilet facilities, something which is sadly largely missing for homeless people in Swansea other than when churches open their doors to people. At Christmas we were able to give some gift boxes to everyone who attends, which included some essential supplies but also some Mince pies and chocolate, as well as a Christmas Card.

The volunteers happily give their time and have really enjoyed some of the experiences they’ve had and the people they’ve met. It’s always fascinating and sometimes heartbreaking to hear some of the stories of people living on the streets. The guests (and that is what they are) who come for breakfast have generally been really appreciative. It probably goes without saying that occasionally there are more difficult issues but those have happily been rare.

Apart from the volunteers doing the practical work, the breakfast club is supported by prayer among members of the congregation. Financially, the work we do with homeless people, either at the breakfast club or day by day, is not cheap and we’ve been grateful to receive some small grants towards the work from the Diocese of Swansea and Brecon and from a local charity, the Austin Bailey Foundation, as well as from a number of generous individuals. It is important that the breakfast and support given is of really good quality. We are often meeting people who feel abandoned by society and we need to show that they are valued and cared for.

It is sad but clear that this is essential work and the sort of work that a church in such a privileged position geographically has to be involved in as we seek to ‘love another as God loves us’. 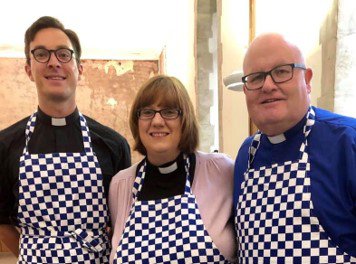