Weddings are among the many ceremonies and events which have had to be postponed during lockdown. But it has been possible for some couples with exceptional circumstances to be married at home. Fr Ross Maidment, assistant curate in Rumney, describes one that he took this week and which will be broadcast on BBC Wales tonight (May 28).

In late March, shortly after the lockdown was announced, I, like many clergy, had to make contact with those who were looking forward to getting married in one of our churches. Initially it was hoped that it might be possible for people to proceed with limited numbers, though the situation evolved quickly. For the vast majority of couples, they were left with two options: to cancel, or to postpone.

Our bishops offered pastoral guidance, which would allow clergy to apply for an Archbishop of Canterbury’s Special Licence for a wedding outside of a church - but this would only be permissible if the couple wished to marry because of an ‘extreme pastoral emergency.’

One of the couples due to be married at St Mary’s Church, Marshfield, expressed a wish to explore this possibility.Daniel Simpson and Ceri King both live locally in Cardiff. I had the pleasure of meeting them July last year, when they came to enquire about arranging their wedding at St Mary’s. Since then, they have joined us for worship on a regular basis - with Ceri often attending alone because of Daniel’s commitments with the Army.When I got in touch with Daniel and Ceri to break the news, they were understandably devastated. They asked if there might be anyway to proceed as planned, as Daniel was due to go on service with the Army, and they were wishing to be married before then. I believed that they had a compelling case, and so contacted my diocesan, who gave her support. The couple were then able to apply for an Archbishop of Canterbury’s Special Licence, which, I am pleased to say, was granted.

And so, in the most unusual of times, Daniel and Ceri were married at their home address in Cardiff on the 23rd May, with just two witnesses present (Ceri’s parents who live at the same address). There was a real intimacy about the occasion. As we gathered in their front room, with the furniture rearranged to ensure we could keep a safe two meters distance, and the dog moved out of the way - the reality of the occasion was just the same. The wedding guests could only be present virtually, and the postman interrupted my homily to deliver a parcel. But nevertheless, as the liturgy reminded us, “We had come together to witness the marriage of Daniel and Ceri, to pray for God’s blessing upon them, to share their joy and to celebrate their love.” It was such a privilege to officiate their marriage. It was a beautiful occasion, filled with joy and optimism.

Daniel and Ceri’s commitment to be married, despite the circumstances, despite the restrictions, was an act of defiant hope - and a celebration of charity. It offers us all a reminder that, in the end, charity will have the last word.

I hope you will join me in congratulating Daniel and Ceri, and praying for them, as they begin this new and exciting chapter together.

Watch Daniel and Ceri Simpson wedding on BBC Wales’ The Great Indoors tonight at 7.30pm and then on iPlayer 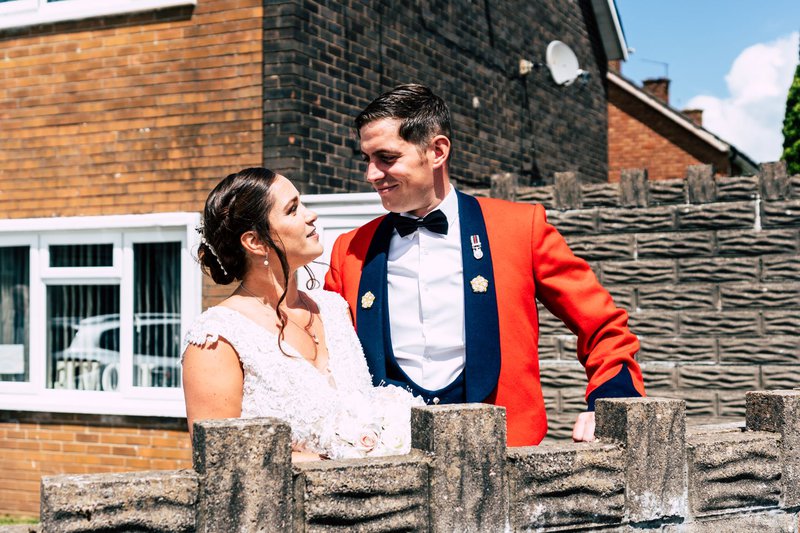