‘Theology’ means literally ‘words about God’. Christian theology involves our trying to understand and explain what God has revealed about himself through Scripture. This work is aided by the writings of past and present theologians and human reason.

An aircraft engineer, who served in the Royal Navy during the Falklands War, will be the next Bishop of Swansea and Brecon.

The Archdeacon of Wrexham, John Lomas, has been chosen as the 10th Bishop of Swansea and Brecon, a diocese which stretches south to the coast of the Gower and north into much of mid-Wales.

During his 12 years as an aircraft engineer in the Royal Navy, Archdeacon John serviced helicopters, Phantom F4 jets and then Sea Harrier jets on the carriers HMS Illustrious, Invincible and Ark Royal, serving in the Falklands War. After leaving the Navy he spent two years in the Middle East, working on tornado jets at Dhahran military airbase during the first Gulf War. He eventually left the career to train for ministry and was ordained in 1994.

Since then, John has served in St Asaph Diocese and has played a key role in planting churches and transforming those in difficulties. As Archdeacon of Wrexham he was part of the team leading the diocese’s successful £1.9m bid for a major evangelism project in the heart of Wrexham – now Hope Street Christian Community. Prior to that John was the diocesan Transition Minister, helping parishes with no current Vicar to think about the future in innovative ways. As Vicar of Holywell for a decade he oversaw the building of a new church, St Peter’s, as a resource for the whole community. 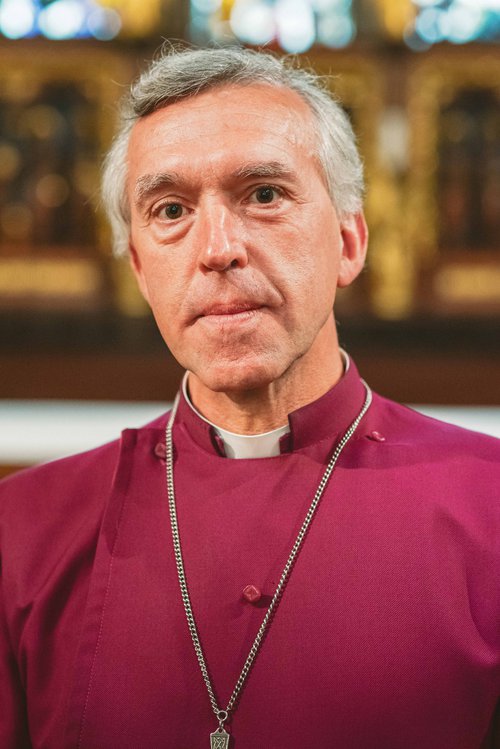 He said, “John will be an excellent addition to the Bench of Bishops and I am delighted he has accepted this role. He has a passion for evangelism and for supporting clergy in pastoral ministry. Above all, he is people focused – he knows how to get alongside others and to help them. His experience in the Royal Navy, in particular, gave him an appreciation that life can be tough and he faces challenges with hope and energy, as well as a gentle sense of humour.”

The Bishop of St Asaph, Gregory Cameron, added, “John has served the diocese of St Asaph faithfully and with distinction. Now he brings his considerable passion for the Gospel and his creative flair to the service of the people and congregations of Swansea and Brecon, and, while we’re sad to lose his ministry, we are sure that he will bring great blessings to his new diocese. We wish him and Jan every blessing as they begin the transition to a new home and ministry.”

Archdeacon John said he was looking forward to leading the Diocese of Swansea and Brecon as it began its new chapter.

He said, “I feel very privileged to have been appointed as Bishop of Swansea and Brecon and am looking forward getting to know the diocese. My motivation has always been to work with people and clergy to release them and resource them to build church in the community and to be the very best interpretation of the Good News of Jesus in whatever situation we find ourselves, whether we are in a large urban setting or a small deeply rural setting. Helping people on the road to living their best life in Christ is a huge privilege.”

He said his time in the Navy, as well as his faith, had given him the confidence to find a way through difficult situations.

“I have been involved in some wonderful life changing projects and worked in and with some amazing teams and I am confident that will continue in this next stage of my ministry. I am very much a fan of keeping things simple, straightforward and understandable. I love the simplicity of the Swansea and Brecon Diocesan message of ‘Gather, grow, go’. I hope to work with the people of the diocese to make sure that these three words burst into life, that gathering happens, growing happens and going happens. And as a consequence a living Gospel is seen, experienced and proclaimed.”

Originally from Ashton-under-Lyne, Archdeacon John joined the Royal Navy after leaving school to train as an aircraft engineering mechanic in the Fleet Air Arm. He worked on Phantom F4 jets, Lynx helicopters and Sea Harriers on airship carriers around the world, and served in the Falkland War. After leaving the Navy he spent two years in the Middle East working on Tornado Jets.

John began training for ministry at St Michael’s Theological College in Llandaff, Cardiff, and was ordained in 1994.

His first curacy was at Rhyl where he served for five years from 1994 to 1999. He then returned to the Royal Navy as a Chaplain to the 3rd Destroyer Squadron serving on HMS’s Edinburgh, Glasgow and Liverpool. During this time he served in Sierra Leone and returned to the Falkland Islands. While there, he led a poignant service of remembrance at the Mount Pleasant War Memorial which was inscribed with the names of those he had served with 19 years earlier.

John returned to Wales as Vicar of Holywell in 2001, where he spent the next 10 years and oversaw the building of the new St Peter’s Church.

John met his wife, Jan, in school and they married nearly 42 years ago. They have two daughters and five grandchildren.

In his spare time, he enjoys walking and reading and is looking forward to hikes in the Brecon Beacons.

He is also looking forward to paying his respects at the Harvard Chapel at Brecon Cathedral, the regimental chapel of the South Wales Borderers. His grandfather served in the regiment in the First World War. In the 1990s, John was Padre to the 3rd Battalion of the Royal Welch Fusiliers.