It’s much easier to stand in front of large groups of people than to talk to a camera, writes the Revd Dr Jason Bray, Vicar of St Giles’ Church, Wrexham, who is recording services at home for YouTube, with help from Noel, the vicarage cat

It became clear once lockdown began that there was a need for services to go online. But given the nature of the church with multiple congregations, it wasn't very easy to work out how, or indeed, who. Many of our people simply have never filled in electoral roll forms as they are new to church, so in many cases, we do not have contact details for them.

For the All Age Worship people, we decided that streaming would involve too much in the way of copyright red tape, so I post the outline of a DIY service onto the dedicated Facebook page, and also email this out to those whose addresses I have. There are prayers and links to places where families can access the readings, songs and usually a short film-presentation. The feedback has been very positive.

For the older parishioners, we needed a different approach. Whilst a lot of them are online, many of them do not do Facebook but they were very positive about YouTube. My colleague, the Revd James Tout, created a YouTube channel for us which means that instead of livestreaming, we record and upload.

Each Sunday, I have recorded a simple said Eucharist in my living room, with a separate sermon, so that people can access one or other: this is then uploaded to YouTube and posted on the church's Facebook page too. It's a cumbersome process: uploading a 20 minute film can take up to a hour! Every day, James and I take it in turns to record and upload Evening Prayer with the same method. Again, the feedback has been positive - the parishioners really like it when I am joined by Noël, one of the vicarage cats (pictured with Jason). 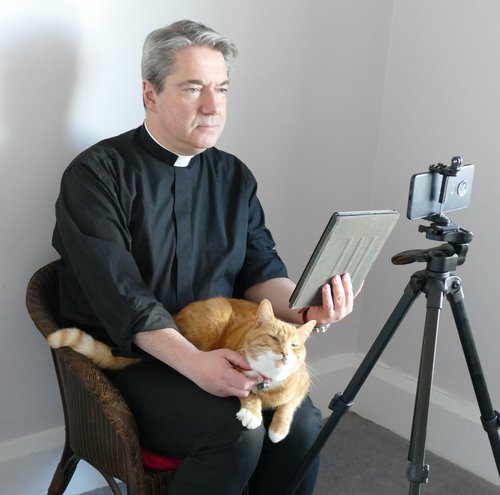 There are significant advantages with this sort of ministry: clergy tend to say the offices alone or with one or two others, but being joined by a large virtual congregation is a great thing. However, it is very stressful: standing in front of large groups of people is easier than talking to a camera! There is also the issue that the technology may not always work as well as expected - a particular problem when you have multiple broadband users in the same house. On the other hand, I am also aware that we have a viewership that extends further than Wrexham, and includes people from my previous parish, as well as friends and family across the globe from as far away as Australia and Argentina!

It is something that I would like to continue once lockdown is over, but because of the limitations of time, it may not be quite as easy to sustain the recording and uploading of daily services, so it may be more of an occasional thing. Watch this space!