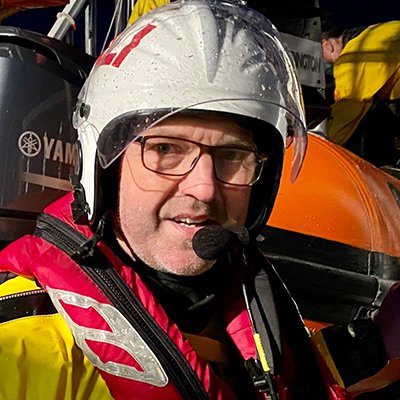 A news report one cold Monday evening about a missing person at sea led a concerned new vicar in the nearby coastal town to the RNLI lifeboat station to offer his prayers for the rescue.

While the crew were grateful for his prayerful support, however, they also needed more practical help and persuaded the vicar to join them as a member of their volunteer crew.

One year on, Canon Robert Townsend keeps a pager under his cassock and a life-jacket at hand as he deftly combines his ministry as Vicar and Ministry Area Leader of Bro Seiriol, in Anglesey, with his new role at RNLI Beaumaris.

“Back on that cold November night, I didn’t realise that the RNLI is always on the lookout for new crew volunteers, especially when they live and work so close to the lifeboat station,” says Robert. “I was asked if I could come back the following Thursday to have a chat with the local Lifeboat Operations Manager, Tim Bailey. He is a volunteer, as is everyone at the lifeboat station in Beaumaris - the crew on the boat as well as the crew on the shore. Volunteers are all sorts of people, some who work on boats, others who had no experience of boats before joining the RNLI.

“That Thursday chat ended up with me volunteering to become a member of the shore crew. I received my pager and started my training, all led by volunteers from the Beaumaris lifeboat crew. Just prior to the lockdown in March I completed the training and assessments, which included some new skills, like learning how to tie a number of knots!” 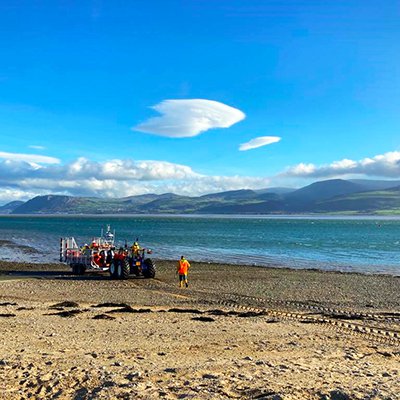 There has been a lifeboat in Beaumaris, or nearby Penmon, since 1830. In recent times it has been called out up to 85 times each year.

“I’ve now been part of the team on a dozen shouts and nothing can prepare you for the sheer panic when your pager goes off for the first time!” says Robert. “You drop everything you're doing, respond to the automated text and proceed in a safe manner directly to the lifeboat station, not knowing what the shout is or how long you're going to be out for. Shouts can be boats breaking free of their moorings, breaking down, or something more serious, where lives can truly be in danger.

“My pager has gone off at all times of the day, including at midnight and 3:45am. It’s gone off twice on one day! Just think, the lifeboat at Beaumaris is an ILB - an Inshore Lifeboat. Whenever it is called out, it involves at least nine RNLI volunteers between the shore and boat crew, as well as a number of volunteers from the Coastguard. It’s a large, but committed team of people.

“I'm also learning to drive the tractor and trailer which launches and recovers the lifeboat. I’ve driven the launch tractor into the sea in the middle of a dark and windy night and been buffeted by the waves. The power of water is amazing and never to be underestimated.

“More recently, I’ve been offered the chance to train as a member of the crew on the lifeboat. I’ve had a small taste of what happens on the boat on a reconnaissance trip. I will need to brush up on my knots again, learn about navigation at sea, radar and a host of other things, which will all be taught by volunteers.” 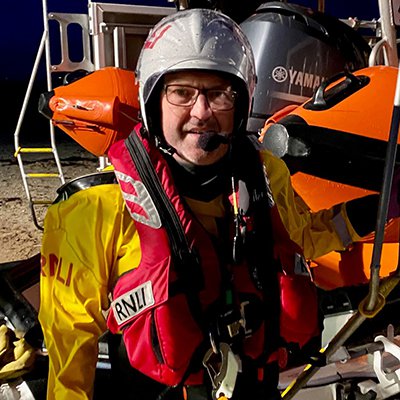 While driving launch tractors and jumping in lifeboats may seem a million miles away from preaching and leading worship, for Robert both are about his ministry as a Christian and service to others.

“Jesus’ life and ministry was all about loving people and pointing them towards God. As a Christian, sharing and showing Jesus’ love is what motivates me, and if I then can help other people to see God at work, even better. For me, being a volunteer with the RNLI is about sharing and showing Jesus’ love for others, by being one small cog in a community volunteer team which helps other people when they really need it. It also enables me, in my role as the local Vicar, to be involved in the life of the community.

“Jesus knew about boats, nets, fishing, wind and stormy seas, and as I learn more about the tides and waters around the Menai Straits, it opens up a whole new way of sensing God’s presence through creation. If I can learn and realise more about God as I’m part of a team that helps and serves other people in a time of need, then volunteering with the RNLI is a really worthwhile thing to do.”

All of us can be torch-bearers. We can carry the light through volunteering, serving and participating. To find out what you can do for your local community, complete the volunteer form with your details and we will put you in touch with someone who can guide you.