‘Theology’ means literally ‘words about God’. Christian theology involves our trying to understand and explain what God has revealed about himself through Scripture. This work is aided by the writings of past and present theologians and human reason.

Home About us Bishops Bishop of Llandaff 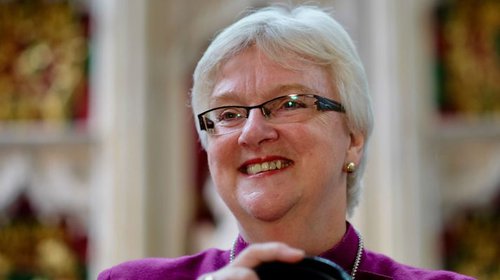 A ground-breaking figure in the Church of England, June Osborne was the first female Dean to be appointed to a medieval cathedral, having served as Salisbury Cathedral’s Canon Treasurer for nearly 10 years. She was active in the national life of the Church of England, serving for many years on General Synod’s Standing Committee, including sitting on the Panel of Chairs.

One of the first women to be ordained as a priest in England in 1994, having been a Deaconess since 1980 and Deacon since 1987, Bishop June’s ministry has been characterised by her passion for equality and diversity and she was a founder of the Church’s Leading Women programme.

She is also deeply concerned about global poverty and has worked with the Episcopal Church of South Sudan on health, theological education and advocacy. She played a key role in the Anglican Communion’s commitment to implementing development goals, and has been a member of the Government’s Advisory Panel for the Commemoration of WW1.

A graduate in Social Sciences from Manchester University, Bishop June trained for ministry at St John’s College, Nottingham and Wycliffe Hall, Oxford. She was made a Deaconess in 1980 and served at St Martin-in-the-Bullring in Birmingham before moving to the Old Ford parishes in East London in 1984. Following her ordination as a priest she served as Canon Treasurer at Salisbury Cathedral and was Acting Dean of Salisbury for two years before being appointed Dean in 2004. She was consecrated Bishop of Llandaff in July 2017.

Bishop June is married to barrister Paul Goulding QC and they have two children. Her interests include the arts and sport.