Home About us Bishops Bishop of St Davids 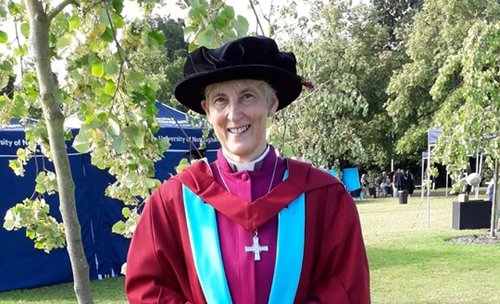 Joanna Penberthy was born in Swansea and grew up in Cardiff. She was educated at Cardiff High School and graduated from Newnham College, Cambridge. She trained for the ministry St John’s College, Nottingham and Cranmer Hall, Durham.

She was made a deaconess in 1984, ordained as a Deacon in 1987 and was among the first women ordained as priests in Wales in 1997.

Bishop Joanna has served in the dioceses of Durham, Llandaff, St Asaph and St Davids and was also the Provincial officer for Parish Development and Renewal for five years. In 2007 she was appointed a Canon at St Davids Cathedral. She left Wales in 2010 to serve in the Diocese of Bath and Wells but returned in 2015 as Rector of Glan Ithon, in the Diocese of Swansea and Brecon, based in Llandrindod Wells.

She was elected Bishop of St Davids in November 2016 and consecrated in January 2017, becoming the first female bishop in the Church in Wales.

Bishop Joanna is married to the Revd Adrian Legg and they have four grown-up children and one grandchild. Her interests include quantum physics, reading and bird-watching.